A throne speech and other announcements in the past several weeks have outlined a a series of high-priority items including $2.2 billion over three years for free licensed daycare for children two and half years old and older.

Analysts pegged the 308-page budget priced at $158.5 billion the “care budget”, with deficits planned over the course after running a $600 million surplus this fiscal year.

A majority of the spending will not be put to use until 2019, if the Liberal plan moves forward.

“We balanced the budget and we have a surplus. Now we have a choice,” Finance Minister Charles Sousa said to reporters, according to multiple reports.

“People are saying, ‘We still need more support.’ So we made a choice to provide more supports.”

There were several new announcements that came part of the proposed budget:

A graphic depicting Ontario’s deficit and surplus since 2009 was released by CBC News.

Opposition leaders at Queen’s Park were quick to criticize the budget.

Mr. Ford, recently elected leader of the PC Party, said that residents of the province are being “taxed to death”.

The PC leader promised to slash four per cent of spending from the province’s budget should his party form government.

New Democratic Party Leader Andrea Horwath described the budget as “meager”, saying that it “would not undo the damage done by the Liberals”, according to CBC News.

“The Liberals have had 15 years and instead of helping, they’ve only made things worse,” Ms. Horwath said.

“Budgets should be authentic, not designed to hold people hostage with power buying promises. We can do better,” the Green Party said in a statement.

More details to follow. Image of Kathleen Wynne and Finance Minister Charles Sousa applauding the budget from the CBC. 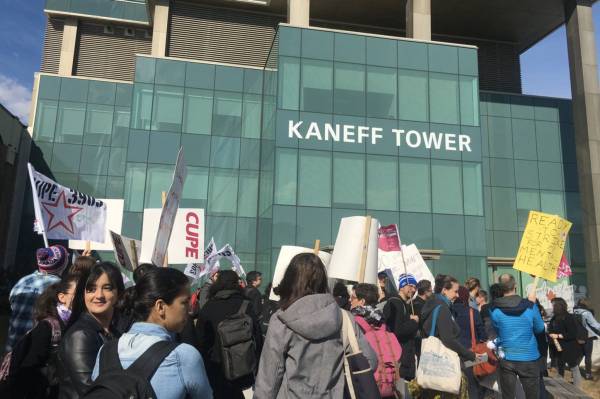 Since York University requested a forced vote supervised by the Ontario government on Monday, the striking contract faculty union has criticized the move as a waste of time.

The local 3903 Canadian Union of Public Employees, which makes up for 60 per cent of teaching faculty at the university, has been on strike since Mar. 5 after the two sides failed to secure a collective bargaining agreement.

In labour disputes, the Ministry of Labour can be brought in once for a forced vote by the employer in an attempt to end the strike.

It takes some 10 to 12 days for the ministry to carry out a “supervised vote”, where every member of CUPE 3903 will have the opportunity to vote on accepting York’s latest offer via secret ballot.

“By doing so, the York administration continues to reject the process of bargaining constructively with CUPE 3903,” the union said in a statement.

CUPE has called on its members to vote against the offer that they say is “largely the same disapointing and unacceptable offer that York proposed before the strike.”

Union leaders said they are “confident that once our membership again rejects this offer, a better settlement can be reached through collective bargaining.”

Each unit operates somewhat independently within the union and each vote to strike and to ratify tentative agreements.

The York University Faculty Union said on Tuesday that they are concerned about the university’s approach to contract negotiations as they enter bargaining to renegotiate their own collective agreement.

YUFA, and the York University Staff Association, are the other two faculty unions on the campuses of York.

The faculty union said “the constant dissemination of aggressive administration messaging” combined with “chaos” during the academic term “has become extremely stressful and divisive” for those at York,  particularly students.

YUFA on Wednesday noted that the forced vote includes a settlement offer that would reinstate an old program that saw “long -serving CUPE 3903 members transferred to renewable term YUFA appointments.”

Essentially, 3903 members would be voting on an issue that would bring major changes to the current YUFA Collective Agreement, which the union said it would not accept.

YUFA made this clear to York on Tuesday.

More details to follow. Image of the picketers from BlogTO.

The tax also applies to motels, hostels, and short-term rental properties including AirBnb’s and rental spaces.

MAT is expected to earn the city an estimated $16 million which will go towards programs and services including Tourism Toronto.

While the new tax has been approved, it won’t be implemented until next month. 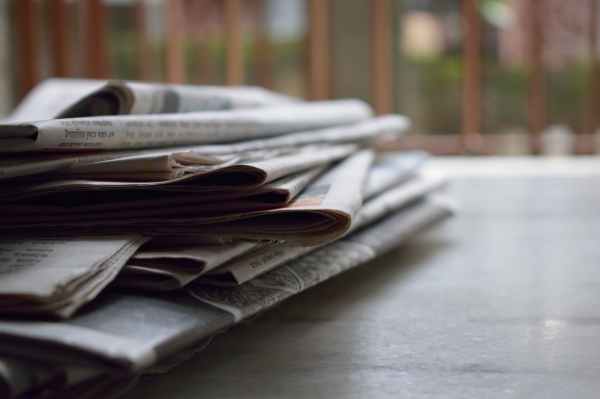 The comedian famous for his roasting of United States President Donald Trump coming to Humber College, Kim Jung-un making moves in China and the York University Senate Chamber occupation makes up the top stories this morning.

Hasan Minaj is coming on Apr. 12 to the North Campus Student Centre for the last IGNITE Real Talks event of the semester, the comedian who spoke at the White House Correspondents’ Dinner and has his own Netflix special.

Students don’t want to miss this event and can get tickets for free online.

Kim Jung Un made a historic trip to China, and nobody knew about it until Tuesday night.

The student occupation at York University continued into the sixth night and is set for a seventh on Wednesday. 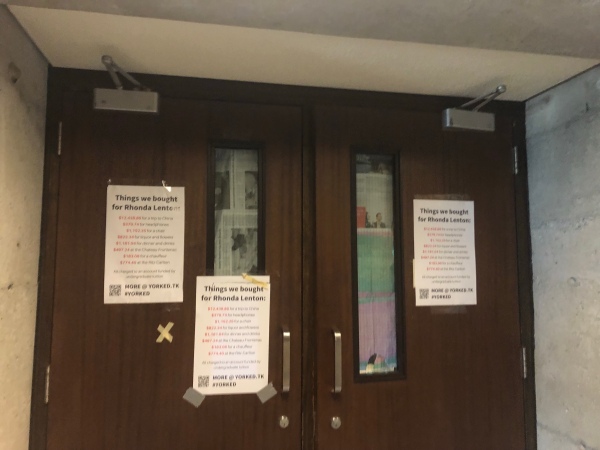 Students occupying the York University Senate Chamber are live streaming the hallway outside the doors.

Watch the live stream via Students For CUPE 3903 on Facebook.

After much speculation, it was confirmed by China and North Korea on Tuesday night that leader Kim Jung-un was in Beijing and held talks with President Xi Jinping for the first time, in a move considered historic.

Analysts say this is a significant progression in North Korea’s preparation for proposed eventual talks with South Korea and the United States.

Xi accepted an invitation from the North’s leader to visit Kim’s country, formally known as the Democratic People’s Republic of Korea.

In February, U.S. President Donald Trump accepted an invitation to meet Kim given via South Korean intelligence officials that met with the DPRK leader just before flying to Washington.

Kim is scheduled to meet South Korean President Moon Jae-in in April, and Mr. Trump in May.

Speculation was aroused earlier this week when a train Japanese media said contained a high-profile figure arrived in the Chinese capital.

Acclaimed comedian Hasan Minhaj will be the featured speaker at the last IGNITE Real Talks event of the semester taking place on Apr. 12 at the Humber College North Campus.

This event will begin at 12 p.m. in the Student Centre, opening with a half-hour talk from Mr. Minhaj, followed by a question and answer session, with tickets available via the IGNITE event page.

Minhaj is a correspondent on the Daily Show that airs on Comedy Central.

Along with being a comedian, he is also an actor, host and a writer.

He received a great amount of attention in early 2017 after hosting the annual White House Correspondents’ Dinner.

Currently, Minhaj has his own comedy special, Homecoming King, that can be found on Netflix.

He has also starred in Rough Night alongside Scarlett Johansson and Kate McKinnon.

There are limited amount of wristbands available for the meet and greet, as it is a first-come, first-serve basis.

IGNITE advises attendees to come early to receive these wristbands, as doors open at 11 a.m. at the KX Building.

This free event is open to both Humber and University of Guelph-Humber students.

Student identification or timetable is required upon entry, along with a ticket.

More details to follow. Image of Hasan Minhaj from IGNITE.

The strongly debated “Transform Yonge”, a project proposed by Toronto’s city council to revamp Willowdale’s portion of Yonge Street, has been pushed back until the next term of city council.

The project will prioritize safety over a shorter commute by shrinking the affected portion of Yonge St. from its current six lanes to four, making space for bike lanes and large pedestrian walkways.

The redesign will affect Yonge St. from Finch Ave. in the north, to Sheppard Ave. in the south.

Those on city council opposed to “Transform Yonge” fear that only having two-lanes on a major road will cause problems for commuters who drive or take the bus.

This version of the project will cost the city an extra $9 million but is seen as a viable compromise.

Councillors are still divided on whether or not to go through with the project.

The Toronto Maple Leafs franchise record 13-game home winning streak came to a crashing end on Tuesday, thanks to Jack Eichel and the Buffalo Sabres.

Eichel powered the Sabres to the victory with two goals, out performing his rival countryman Auston Matthews on the night.

Even after the victory, Buffalo continues to occupy last place in the entire NHL, with a lowly 60 points through 76 games.

Sabres goaltender Chad Johnson had an excellent night, turning away 39 of a possible 41 shots.

Only two shots got behind the Sabres goalie, both coming in the second period.

The second, a power play goal on the door step by Patrick Marleau, off of a spectacular set up from Matthews,

Casey Nelson also scored for Buffalo in the game, firing a point shot which ended up deflecting off Leaf defender Roman Polak.

Toronto will prepare for their next game, another home tilt coming against the Florida Panthers on Wednesday.

Game time is scheduled for 7:30 p.m. from The Air Canada Centre and can be viewed on Sportsnet.

More news from the ice