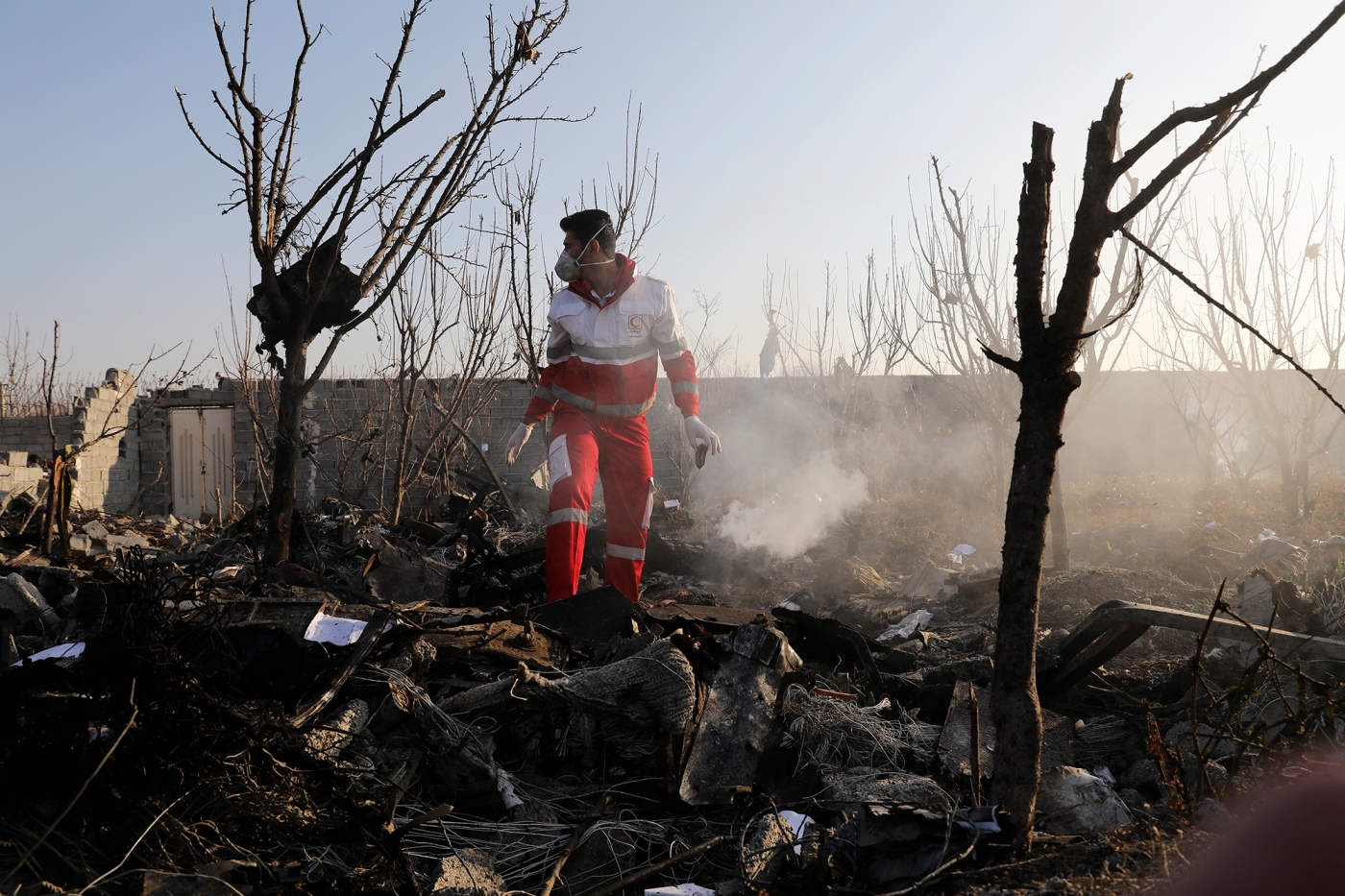 Ukraine’s foreign minister said on Wednesday morning that 63 Canadians are among those killed when a passenger plane crashed shortly after takeoff from Iran’s capital, with the Ukrainian Embassy backing away from an initial conclusion that the incident was an accident.

Debris from the wreckage of Ukraine International Airlines flight PS752 were scattered around the farmland outside Tehran, with all 167 passengers and nine crew aboard killed. The flight was headed to Kiev.

Though early comments from Ukraine suggested that the crash could have been accidental, a further statement from its embassy said those comments were not official, omitting the mention of mechanical failure as the cause in the latest update.

The Ukrainian airline company said on Wednesday that the Boeing 737-800 that crashed was one of the best aircraft in its fleet and that the pilots were very experienced. Its last inspection was two days prior to the crash, officials said at a press conference in Kiev.

Airline industry expert John Cox told CBC News that it was important to note that the plane model has a reliable track record. It is also reportedly the airline’s first crash since its founding in 1992.

Both black boxes have been found in the wreckage of the crash and could reveal more details behind what occurred, however, the Iranian government said it will not give the records to Boeing.

Canada’s foreign affairs minister gave the government’s first formal response Wednesday morning, calling the crash “tragic news”. Minister François-Philippe Champagne added in his tweet that he has been in contact with the Ukrainian government.

Prime Minister Justin Trudeau followed up several hours later with an official statement giving his condolences to the families of those on board PS752 and vowing to enforce a “thorough investigation”.

Two Canadian students were among the dead, according to Iran’s Islamic Republic News Agency. Marzieh Foroutan was a student at the University of Waterloo and Delaram Dadashnejad studied in British Columbia, according to images of their ID cards posted to social media.

CBC also reported that married professors from the University of Alberta and their two daughters were also killed in the crash, among 27 other residents of Edmonton believed to be on board.

Iran’s Supreme Leader Ayatollah Ali Khamenei, addressing a gathering of Iranians chanting “Death to America”, said the Wednesday morning airstrikes were a “slap on the face” of the United States and U.S. troops should leave the region, reported Reuters news agency.

Tehran’s foreign minister made it clear that the strikes were “proportionate measures” in an act of self-defence just hours after Soleimani’s funeral in Iran and that the country did not seek to escalate the confrontation with Washington.

Though officials were quick to assure that there were no casualties, Canadian troops may have been at one of the two bases targeted by Iranian ballistic missiles early on Wednesday local time.

An airbase in Erbil has been the hub of Canadian military operations against so-called Islamic State for several years now as part of the United States-led operation IMPACT.

NATO confirmed that there were no casualties from Iran’s strikes among their forces serving with the alliance in Iraq. The alliance’s Secretary General Jens Stoltenberg condemned the attack and called for Tehran to refrain from further violence.

U.S. President Donald Trump said he would be making a statement on Wednesday morning in response to the overnight Iranian strikes.

Canada, who plays both a role in the North Atlantic Treaty Organization and U.S.-led anti-Islamic State coalition presence in Iraq, started a withdraw of “some of our people” to Kuwait, Chief of the Defence Staff Gen. Jonathan Vance said on Tuesday.

It came after the Iraqi parliament and prime minister has called for Western militaries to leave the country and as other Western allies carry out a similar partial withdraw.

Western troops in Iraq have been on high alert since the weekend killing of a top Iranian military general by a U.S. drone, the Canadian Press reported.

Vance says the decision to withdraw an unspecified number of troops was made alongside NATO and Canada’s allies to ensure their safety and security.