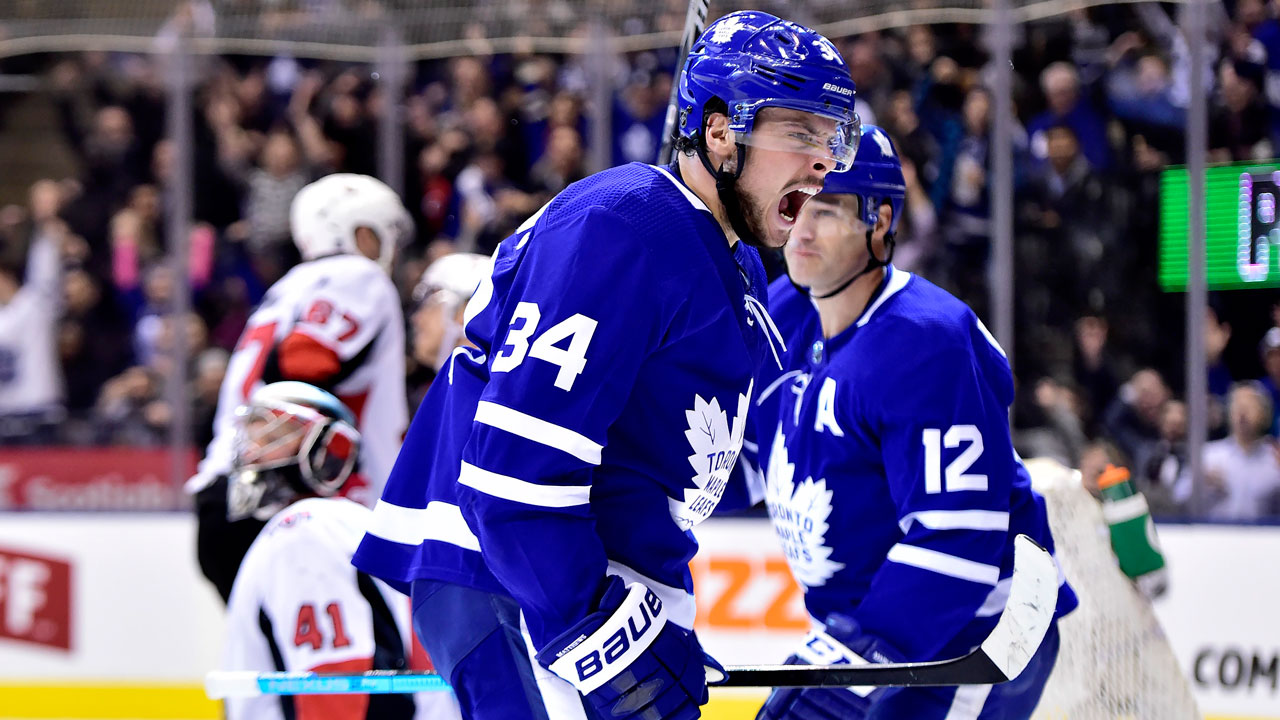 This game had a frantic pace, including a plethora of goals, and multiple lead changes, as it’s safe to say Bob Cole and the fans at Scotiabank Arena couldn’t have asked for much more out of Ontario’s two hockey clubs.

The Maple Leafs jumped out to an early 1-0 lead when Mitch Marner found Zach Hyman for a tip in goal on a two-on-one just 7:46 into the hockey game. The goal was Hyman’s 10th of the season, and gave Toronto the advantage after a flurry of action from the outset.

Ottawa would respond before the end of the period though, as after a number of big time stops from Craig Anderson, forward Magnus Paajarvi would catch Toronto on a bad change, and fire a wrister home on a clean cut breakaway, evening the score at one’s.

The middle period would see the Senators grab their only lead in the hockey game early, as star forward Matt Duchene would find the back of the net just 1:35 into the second to give Ottawa the 2-1 advantage. The goal would see the puck carom off of Andersen’s stick, then deflecting off the leg of Gardiner, and the face of Zaitsev for a fortunate bounce for Duchene to bury the tally.

Freddy Andersen would be called upon later in the period to bail the Buds out and hold the game at just 2-1, buying time for the Leafs offense to strike. Toronto’s response would come in the final quarter of the period, registering three goals of their own, starting with Andreas Johnsson’s. The tying goal would come at 14:20 of the second, as Johnsson would throw a backhander on goal that caught Anderson by surprise.

Then, just over two minutes later, Auston Matthews would score his 24th of the season on a highlight real play to place Toronto out in front 3-2. The goal would see Matthews toe drag past Sens d-man Mark Borowiecki, and re-coral the puck, before ripping it over the shoulder of Craig Anderson.

Finally, before the end of the second, fellow centreman John Tavares would also find the twine for his 32nd of the year to give Toronto a nice two goal cushion heading to the locker-room.

The Senators would storm back to start the third period, seeming rejuvenated, and it would pay off big time. Ottawa would get the two goals they needed to tie the game up in the opening four minutes of the third, scored by Thomas Chabot and Magnus Paajarvi.

But the Leafs would get the last laugh thanks to a give and go between Zach Hyman and Morgan Rielly, leaving the latter with his 14th of the season to win the game for Toronto by a final score of 5-4.

Revisit the game’s highlights below.

Up next, Toronto will begin a six game road trip starting in Quebec, where they’ll take on their arch rival Montreal Canadiens.

Game time is set for 7:00pm from the Bell Centre, and can be seen on CBC’s Hockey Night in Canada.

More news from the ice

Out of town scoreboard